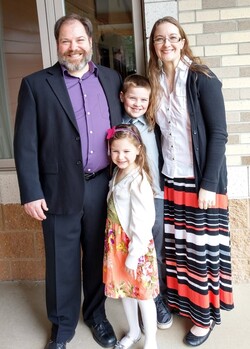 The Hoover family lives in Sarnia, Ontario, where they work as leaders in a new church planting movement under the sponsorship of the North Atlanta Church of Christ. Jeremy publishes a regular email newsletter about this work, which you can subscribe to at this link. Please sign up to keep up with our activities here, to pray for us, and to give financially to partner with us in this work.

Jeremy is available to speak at your church. He is available for guest teaching, fill-in preaching, seminars, workshops, prayer meetings, or to help coach your ministry or leaders. You can reach Jeremy at the contact page.

Previously, Jeremy was the minister at the Otisville Church of Christ in Otisville, Michigan from December 2011 until July 2019. His main responsibilities are preaching and teaching and to help with spiritual and leadership development.

He grew up in Windsor, Ontario where he learned the faith at the Westside Church of Christ and was involved in ministry during high school years through song leading, leading at the Lord's Supper table, and teaching and preaching. He was fortunate to learn from, and later to work with, a great group of elders that included his grandfather and also his father.

When their time in Memphis was over, they moved to St. Joseph, Michigan, where they worked in youth ministry with the Church of Christ in St. Joseph (2001-2003). There, Jeremy organized and led a start-up youth ministry. Following this, the Hoovers moved back to Windsor because of a family illness. While in Windsor, Jeremy served as an assistant minister for the Westside Church of Christ (2004-2005), where he organized and guided a small-groups ministry.

When the time was right, the Hoovers moved to Jackson, Michigan to work with the Horton Road Church of Christ. Additionally, while in Jackson, Jeremy taught two semesters of "Introduction to Youth Ministry" at Rochester College (in 2006 and 2008).

In 2009, Jeremy and his summer assistant wrote a little book that corresponded to the summer preaching series on the Gospel of Matthew called “This or That.” The sermon series focused on the choices Jesus called us to, so the book was written in a Choose Your Own Adventure style. Called This or That: A Day in YOUR Life, the book called readers to make choices according to their understanding of Christianity. Some choices exposed self-righteous attitudes; other choices drew readers deeper into the life of Jesus. A PDF copy of this book is available here.

Please use my contact page to reach me with any questions.